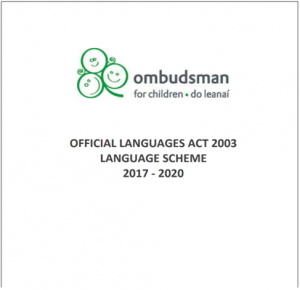 The Ombudsman for Children’s Office (OCO) formally launched its first Irish Language Scheme in 2017, which will begin the process of providing Irish language services to the public over the next three years.

The scheme has been developed to integrate the Irish language into the work of the Office and to widen the services available to the public through Irish. This scheme was developed in accordance with the Official Languages Act 2003.

The OCO is an independent organisation which falls under a number of public service obligations. The Act requires public bodies to outline the measures to be adopted and to set out a clear timeline of delivery.