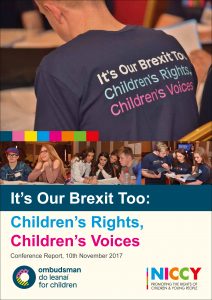 This is a report on the views, hopes and fears of young people, North and South, and is the outcome of a unique cross-border conference hosted by the Ombudsman for Children’s Office and the Northern Ireland Commissioner for Children and Young People.

It’s Our Brexit Too: Children’s Rights, Children’s Voices represents the views of 120 young people from both sides of the island who came together at a conference to explore how Brexit could affect them.  It outlines considerations and protections that should feed into decisions on areas such as education, child protection, freedom of movement, family life and health.

The conference hosted in Newry in November 2017, was organised and led by a cross-border Steering Group of young people.  Tánaiste Simon Coveney participated in the conference via video link, and it was attended by Parliamentary Under Secretary of State for NI Chloe Smyth MP, Mairead McGuinness MEP, Jim Nicholson MEP and senior officials from both sides of the island.