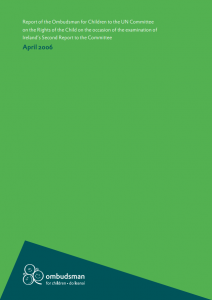 In its Concluding Observations on Ireland’s Initial Report, published in 1998, the UN Committee on the Rights of the Child made 17 substantive recommendations calling for changes in law, policy and/or practice in the State.

Since that time, the State has made significant progress in implementing a number of these recommendations including through the development of the first National Children’s Strategy, the establishment of the National Children’s Office and more recently the Office of the Minister for Children; the development of child well-being indicators, and the establishment of an independent monitoring mechanism that is the Ombudsman for Children. However, much remains to be done in order to address fully the concerns expressed by the Committee in 1998. Indeed, in its report, the State has acknowledged that ’putting children at the heart of policy and practice is a new way of working and is at an early stage of development’.

In this report, submitted to the Committee in the context of the examination of Ireland’s Second Report to the Committee, we reflect on the advances made since 1998, on new issues and on outstanding concerns.