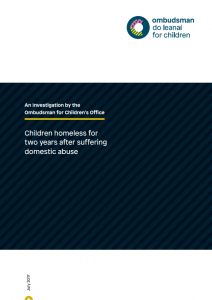 This report provides details of an investigation we carried out on a complaint we received in October 2014. We received this complaint from a parent on behalf of her children. She told us that she and the children had left their home due to domestic violence and waited almost two years to be housed. They stayed in a women’s refuge for three months and emergency accommodation for a year and a half. She advised that she was not happy with the length of time that she and her children were in emergency accommodation and the quality of accommodation provided. Three public bodies were involved: